Stuck in a hospital and stuck in the polls, Rob Ford has officially ended his campaign to become the next Mayor of Toronto—not that being stuck in the polls had anything to do with it. Toronto’s all-but-castrated Mayor recently learned that he has a tumour in his abdomen, and that, whether malignant or benign, its removal and his subsequent treatment will make it impossible for him to continue his campaign. It’s a sad and confusing day for many reasons.

Ford’s withdrawal is sad because it involves illness. All joking aside, it’s never nice to see someone fall ill. We hope he recovers quickly. On another note, though, Ford’s withdrawal is dissatisfying because it isn’t truly democratic. In a true democracy (rare as they may be), voters get to kick lousy politicians out of office. In Toronto’s perverse anti-democracy, a tumour steals that glory. That has to be annoying for angry voters. But that’s only the beginning.

It’s even more annoying that Rob Ford’s withdrawal has paved the way for Doug Ford’s candidacy. Yes, Doug Ford is now officially running for Mayor. Many words describe this turn of events. While opportunistic may seem most appropriate at first, I prefer Russian. It feels like these two are trying to become Toronto’s Putin and Medvedev: a rotating duo who can lead Toronto forever. Sure, there are issues with the comparison, but there’s also a striking similarity in leadership styles. Who makes the decisions, Rob or Doug, Dmitry or Vladimir? We can bet on the answer to that question if Doug becomes Mayor and opens a waterfront casino. 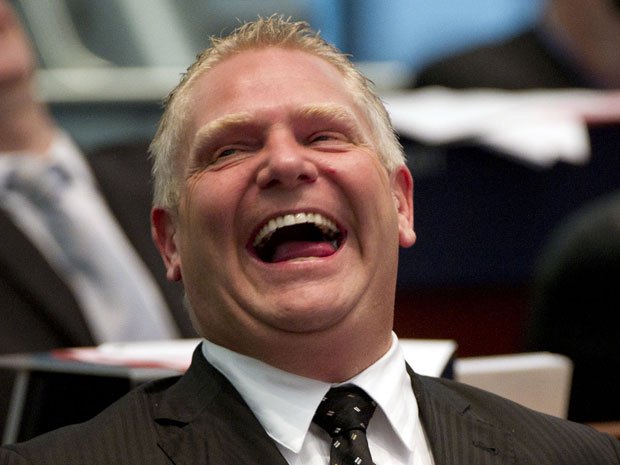 But does he smoke crack?
Darren Calabrese

Beyond being irritating, Ford’s withdrawal is confusing because it appears inherently contradictory. On one hand, he is ending his bid to become Mayor because he is in the hospital and doesn’t have time to campaign. On the other, he has announced a bid to run for Councillor of Ward 2. Is running for Council that easy? Lost in all this is Mikey Ford, the youngest of the Ford brood, who was already set to seek office in Ward 2. He in fact withdrew his candidacy today. At times like these, we paraphrase Dr. Nick Riviera: “In Ford Nation not running means running? What a country!”

Forgetting feelings, what does this mean for voters like you? If you’re Ben Johnson, it means will have to vote for someone else. Probably Doug. If you’re Mike Tyson, it means you weren’t a voter anyway. If you’re a regular Torontonian, there’s a 70% chance that you weren’t going to vote for Rob Ford anyway. So, just like every media report on Ford’s whereabouts and activities over the last four years that somehow failed to put a dent in his support despite demonstrating unequivocally that he is a man of questionable character, this probably means nothing. That majority of you can go back to gardening, eating, or whatever it is you were doing.  Toronto will survive, and hopefully Rob will too.