When a child pulls the fire alarm during a test, they win some friends. The unprepared and nervous see the pullee as a saint, a bringer of second chances and serendipity. The studied and well-versed, on the other hand, observe the student as a mischievous wreck, an annoyance to be dealt with at another date, another time, certainly after photosynthesis is regurgitated.

When firemen pull it, and when they also use smoke bombs, flail pamphlets on a municipal property, drench public papers in water, and create small, controlled flames, the same cannot be said. There are no friends gained; there is only a firestorm without the fire, a burn that cannot be healed. 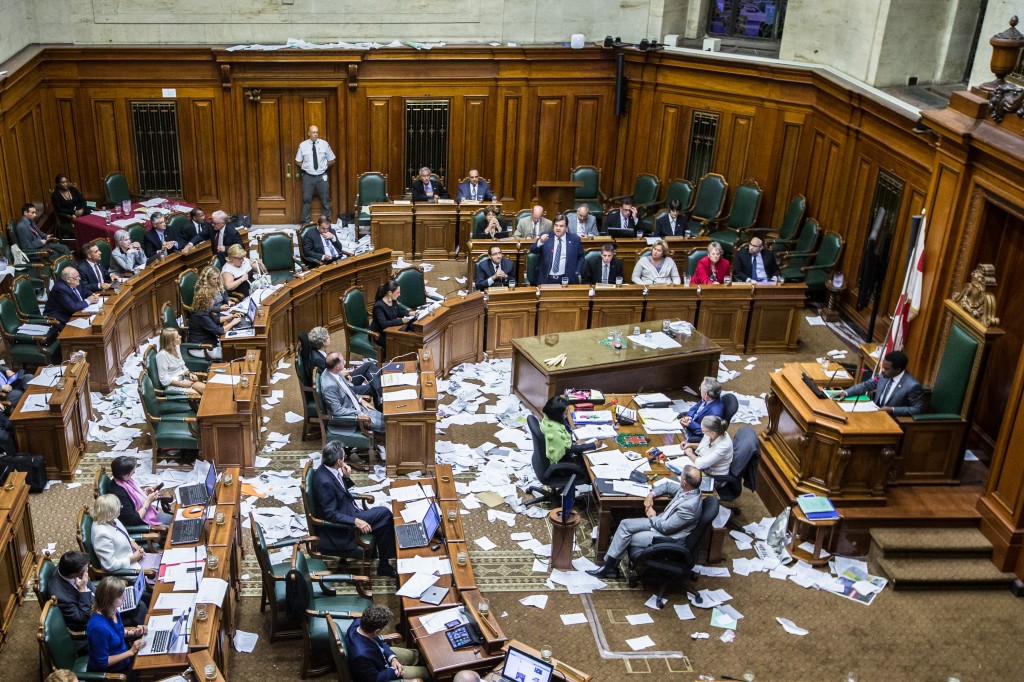 When things don’t go your way, one always reserves the option to throw things on the floor.
Dario Ayala/The Gazette

On Monday August 18th, Philippe Couillard’s newfangled majority went through a similar test as firemen and other municipal workers raided Montreal’s city hall. In what can only be called outright hilarious, they paraded through city hall hootering, hollering, trying to break down doors, and spraying things with water. It was almost as though there was a fire somewhere. Stress the almost.

The flaming discontentment sparks from Bill 3, which tackles the four billion dollar deficit Quebec has on its pension plan. The current pension plans were drafted under Parti Quebecois Lucien Bouchard in the 90s, and they were created during relative opulence (you know, the golden years of the tamagotchis and old GameBoys and failed foresight). The plans, however, have not kept with the time due to increased longevity of life and general economic downturn.

From a defined payout to a defined contribution plan, Bill 3 would reverse the dwindling trend by legislating a 50/50 split of municipalities and employees paying for the pensions (as opposed to the one-hundred percent municipality currently practised), be able to freeze cost of living increases for retirees, and cancel any further indexation for retirees. In the Bill’s own words, it is “an Act to foster the financial health and sustainability of municipal defined benefit pension plans”.

It is not the Bill itself that has caused the incendiary response; instead, it has been the tabling of it and the failure to negotiate with the unions themselves. Marc Ranger, head of the coalition of municipal worker unions, said that, “They [the Liberals pushing the bill] are saying: “I am telling you the final destination, but I’m going to be flexible on how we get there.”

And currently, it seems, there seems to be two ways to get ‘there’: acquiescence or a riot. Both are bad for different reasons: the former is too final and the latter makes it so that no one can hear themselves over the fire alarm blaring.

Perhaps, then, it is better to say that currently there is no there there, at least so far as the municipal service workers are concerned.

What needs to be mentioned is that the police – who are also affected by Bill 3 – near city hall did not respond to the protest. Compare that with the response only two years ago where the Montreal law enforcement were in riot gear with their guns a’shooting, their tear gas a’firing, and their yells a’trumpeting. Back then, they seemed all too rapid to respond. On the 19th, a slab of jello would have moved quicker to the scene than the police. Might even cost less too, and besides, who would protest if jello was around? 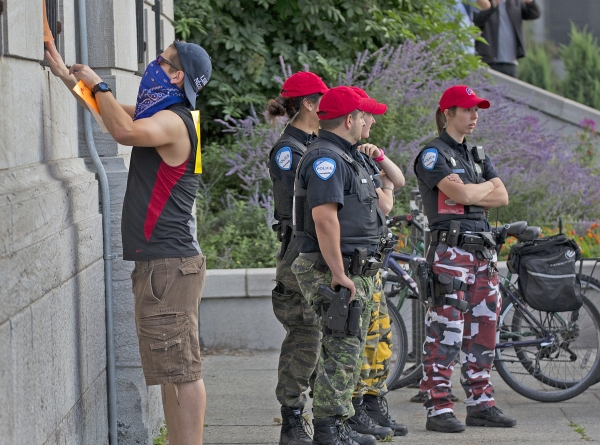 Well, it’s not like they’re protesting tuition hikes or anything.
Jacques Nadeau/Le Devoir

In both cases – the indolent police and the raucous firemen – there is a limit to willfully and legally protesting. Simply said, they cannot abandon their posts. As a result,

But what transpired on the 19th was a class of two kinds of protesters: those who define the law and those who are enslaved by it.

Luckily, though, Marc Parent, Montreal’s Police Chief, said there would be an investigation under the way. Police investigating police. That’s comforting, kind of like having a cigarette company researching the dangers of smoking. Nothing could go wrong because nothing is wrong. Smoking is great, who’s asking? The police? Yes? Well just I have a friend who is a police officer and he works in Montreal and he tells me everything is alright, alright? Alright.