Canadian politics suck. Canadian politicians suck. Lies and deception are the name of the game now. Have fun wading through the bullshit and trying to puzzle out which one of these lying scoundrels has the most appealing batch of baloney. The worst of these awful, stupid, soul-sucking, power hungry liars have risen to the top of each of the three parties most likely to win the next federal election. Truth in Canadian politics is always a technicality. Whoever gets elected will have a mandate based on malarkey. Without further ado, let’s meet one of the polished turds who may be running our country come October 20th, 2015: Stephen Harper

Stephen “Let’s be Clear” Harper was magnificently clear in his calmly delivered answers during Maclean’s Federal Leaders Debate. His opening remarks began by stating that he would “correct a few facts”, yet for the entirety of the debate he misconstrued things incessantly. This obviously happens under the pressure and time constraints of a debate, especially one as early in the campaign as this one. But both the election started this early and the debate format was changed because of this geeky asshole and his cronies. Stephen Harper sucks because Stephen Harper is a deceitful, lying dirtbag.

The first people on Harper’s case are usually hippies and environmentalists. Why? Because not only is Harper’s environmental record piss poor, but he then goes into a nationally televised debate and spews things like:”we are the first government in history to reduce greenhouse gas emissions while also growing our economy… And how have we done that? We do that through a sector-by-sector regulatory approach.”

In 2009 emissions dropped heavily as a result of the economic crash, which caused a huge number of industries to halt production. However, emissions have increased every year since. The drop was in no way correlated to Conservative policy or regulatory approach. So, while technically a decrease in emissions is true, playing it up as an accomplishment for the Harper government when so many lost their jobs is incredibly rude. A by-product of the economic crash is what makes the Conservatives technically look as if they have actually done something substantial to help the environment. The real way that Harper’s government reduced greenhouse gases was by being in charge of an economy that went to shit.

In 2013, Harper’s Canada was ranked dead last amongst the world’s wealthiest nations on the matter of climate policy. When asked directly by debate moderator Paul Wells if Canada would meet its Copenhagen targets, Harper stated that he “believe[s] we will.” Now belief is not a question of fact, so this cannot be called a lie. However, the GHG levels are on the rise and future projections aren’t good. Currently Harper’s belief is nothing more than that- a belief. It relies on “technical innovation” as he put it, meaning that he is banking on inventions and scientific advances to bail him out, rather than rigorous regulation. This is not lying, but it certainly doesn’t fit with Harper’s promise of clarity and facts. The Conservative way appears to be Up with faith! Down with facts!

Finally, when it comes to combatting climate change, don’t look to the Prime Minister for help because taxes are bad. Harper characterized the proposals for limiting emissions put forward by opposition parties as “carbon taxes that will inevitably… [r]aise money for the government… it’s a front, it is about getting revenue for governments.” Stephen Harper is not an idiot; he probably knows this is wrong and is lying to deceive voters. However there is a distinct possibility that he is just not informed about how these things work, even if all he has to do is look at the policies in his own country to figure out that he is dead wrong. British Columbia’s Carbon Tax is revenue-neutral. That means it does not raise revenue for government.  It is offset by tax breaks elsewhere. The “fact of the matter”, as Harper likes to state incessantly, is that carbon taxes do not “inevitably” raise money for the government.  Say what you will about the effectiveness and whatever else, the Prime Minister is wrong in this regard.

Upon further review of the debate, the man may actually be a little slow. In order to make his plan to force old people to work longer sound appealing, Harper said that it was a non-issue given that the “retirement age won’t go up for over 10 years- until 2023.” Fact: it is 2015. Ten years from now is 2025. 2023 is in eight years. Stephen Harper is a liar.

Harper insists we cannot trust his opposition because “now is not the time to throw us back into deficit.” The Parliamentary Budget Officer (PBO) is projecting a deficit this year.  The PBO was a position created in 2006 by the newly elected Conservatives to provide independent analysis of the nation’s finances and estimates on Canada’s economy. Harper touted independent analysis and oversight as crucial to security policy, yet he ignores it here. Truth is, no matter who is elected, Canada is probably going to be thrown back into deficit at least this year.

The budget itself was a wonderful way of lying with statistics. It was released in April right before tax season allowing the government to claim to have $3 billion more dollars than they actually did. How? Because the government hadn’t handed out the $3 billion in Universal Child Care Benefit cheques.

That child care benefit was part of a Conservative plan to do all they can to help families. A plan that also included the misleadingly named Family Tax Cut. The Family Tax Cut sucked because it only fully benefitted 15% of families, most of them quite wealthy. It gave nothing to single parent families which make up 16% of Canadian families. Remember, to Stephen Harper a wealthy 15% was the priority for a tax cut over a needy 16%.

“I am not a robot! I made these human children ”
Twitter, @pmharper

Stephen Harper said that there is “no higher purpose than ensuring the safety and security of Canadians.” From that, we might want to buy into Harper’s anti-terrorism ideology, except for the fact that lighting and bathtub slips kill more Canadians than terrorists per year. While there were only 2 men killed in what was referred to as a “terrorist” attack on Ottawa in October, there are 9 to 10 Canadians killed a year by lightning strikes.  However, it stands to reason that we can’t spy on lightning. That’s how we ended up with C-51.

Spying can go wrong. Security agencies need to be policed and regulated. Everyone agrees that oversight is necessary. This includes Stephen Harper who is adamant that, with regard to C-51, the Conservatives have also provided oversight. Although ever the government hater, Harper’s plan is to remove any political oversight and “have oversight done by independent experts, people who are experts in the field.” Yet for some reason former Prime Ministers Jean Chretien, Paul Martin, Joe Clark, and John Turner, as well as 18 others formerly involved in security matters, signed a letter condemning C-51. That list of people includes five former Supreme Court Justices and a collection of individuals involved in Canadian security matters between 1968 and 2014, all of whom should qualify as “experts”.  C-51 is “overseen” by the Security Intelligence Review Committee (SIRC). The SIRC is a review board, not an overseer, which means they review actions taken, rather than properly overseeing CSIS in real time. Effectively, the Harper security motto is that it is better to ask for forgiveness than permission. There is a mechanism in place to correct mistakes, but there are no mechanism in place to prevent them.

There is so much more to complain about with our Prime Minister and, thankfully with another two months until the election and god-forbid another four years of him after that, there will be plenty of time to do so. Or, if he doesn’t win, maybe all those silenced scientists will give us a boatload of other reasons to hate this geeky pseudo-dictator. Oh, and once the Mike Duffy trial finishes we might know more about the shady House of Cards-esque backroom dealings of this Conservative Government.

Maybe you just get sick of people after a certain amount of time. Or maybe he just sucks. And it isn’t just his politics. He is funny looking. Stephen Harper looks like a cross between Sid the Sloth from Ice Age and Donald Trump, with none of either’s entertainment value. Can we please elect someone else? 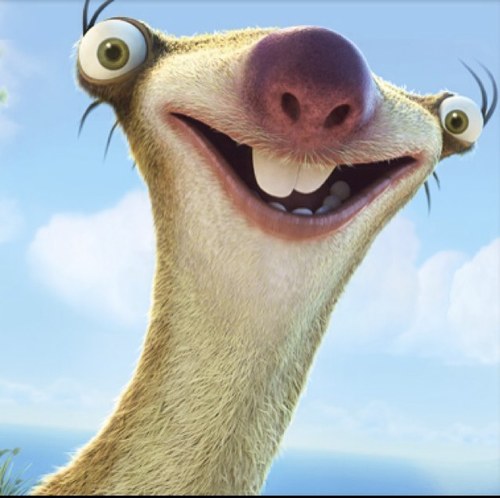