In an email dated April 24th, obtained by the CBC, the Foreign Affair’s communication team tasked all bureaucrats in security-related divisions to provide its office with three terrorism-related statements to be issued to the media every week. While it isn’t odd for bureaucrats to be asked to produce information that lends support to the government’s agenda, enforcing a quota does seem to err more on the side of fear mongering.

Gordon Smith, a former Liberal deputy foreign minister, describes the quota as “pretty unusual”. He said “one has to wonder if this isn’t because we’re coming up to an election” And one would wonder correctly. Since national security has become a likely key point of debate come election season, the Tories have been on the issue like stink on shit. However, as most Canadians have yet to see eye-to-eye with the PC on some of their more abrasive policies *cough-bill-C-51-cough-niqabs-cough*, it makes sense that Rob Nicholson’s office will want to beat the public over the head with the issue until they think a soft gust of wind is a breach of national security. When asked by the CBC about the directive, Nicholson’s press secretary responded “we make no apologies for communicating with Canadians on important issues, such as security, when they arise.” 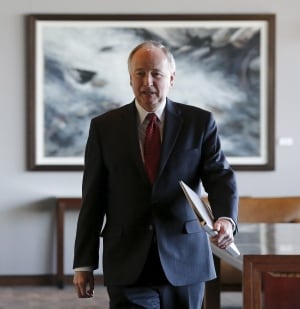 “Scaring the country…easily the best part of my day!”
CBC

Of course, I think the real victims here are the terrorist. Sure, they’ve committed themselves to a life of crime, but with a three-statement-a-week minimum, bureaucrats will eventually have to start digging real deep to meet their quota. Soon, Jihadists will have to start worrying about each of their bowel movements being publicized as a terrorist threat.

This order also hasn’t seemed to bode well with bureaucrats working in the foreign affairs department who don’t see creative writing as part of their job description or who aren’t prepared to stretch their morals as far as they’d be stretching some of the information to qualify it as ‘terrorism-related’. One Foreign Affairs bureaucrat, who spoke with the CBC on the promise of anonymity, said, “we’re not making a special effort to fulfil this odd request.” Over the months since the order was issued, the quota has been rarely met.

I am at an impasse on this one. While I don’t really like the idea of a quota being used to fuel a scare-tactic, I don’t really want to be telling bureaucrats not to do their jobs either. God, I also don’t want to support terrorism. Well, looks like the only thing I can do is just not watch the news until the election’s over. Oh boy, there’s a Diner’s, Drive-ins, and Dives marathon on the food network! Ah, blissful ignorance! The kick is the Jalapeños!
The Huffington Post