Every eight year old girl has fantasized about living as a mermaid in her own underwater kingdom. Every fifteen year old boy would be lying if he said he didn’t have Ariel fantasies of his own. I myself find nothing sexier than a mermaid. Just thinking about holding one in my arms and running my fingers up her soft legs as I passionately press my lips against her sea bass gills makes me weak in the knees. Hey baby, are you a big mouth bass? Because I’d sure like to take you home and mount you up against my wall.
gregoryfisher85

Of course, like the other desires I’ve confessed only to my psychoanalyst, the aquatic nymph of my dreams remain just that: in my dreams. Mind you, there are always toys to simulate the experience. Synthetic mermaid tails have been on the market for a few years now. They provide recreational fun for mermaid fanatics and alternative aquatic exercises for fitness gurus. Edmonton’s Kristina Visinski hoped to pursue mermaiding professionally. She would teach exercise classes, host children’s parties, and appear at public events or an Irish wake here or there. But, like learning that Santa inst real, Visinski’s dreams were crushed when the city banned the use of mermaid tails in all their pools. 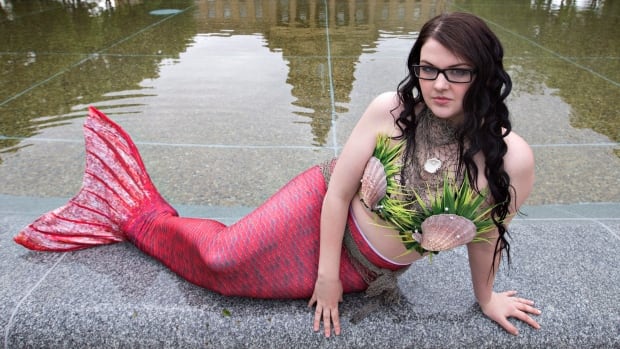 Krista Visinski posing in her mermaid tail outside what I think must be the only pool in Edmonton.
Jason Franson/Canadian Press

Christopher Webster, a spokesman for the city of Edmonton, explains that the city is concerned that the tails promote holding one’s breath for long periods of time, which can result in blackouts and drowning. Webster says that Edmonton has no plans on lifting the ban, but may give Visinski and other aspiring professional mermaids an exception.

No incidents of mermaid tail-induced drowning have been reported as of yet. In a letter, Eric Browning from Fin Fun Mermaid, an American company that produces mermaid tails, wrote, “I guess if a person holds their breath long enough, they can black out even if they are not in a pool.” Touché. In fact, now that I think about it, I don’t think I’ve ever blacked out in a pool. I usually only black out when a Conservative attack ad comes out and I run head first into a wall, only to wake up 20 minutes later when it’s over.

Much like every cross-Canada road trip ever planned, Western Canada’s systematic discrimination against mermaids doesn’t stop in Edmonton. The City of Surrey, British Columbia, has also banned tails during public swim times out of concern for inexperienced swimmers. Jack Birkett, aquatic operations co-ordinator for the City of Calgary, says Calgary may soon follow suit. Currently, any Calgarian wishing to animorph into their aquatic alter-egos must first pass a swimming test with a lifeguard to prove that they are competent swimmers with and without the fin. Mermaid advocates who support administered tests understand the safety concerns associated with the tails, but believe a total ban is too brash a move.

I, for one, see mandatory swim testing as a hindrance to the incredible opportunity this new technology represents. Think about it. For what’s likely the same amount of money that the government uses to fund the senate, and with the expertise of Canada’s best plastic surgeons, we could be on the brink of creating a real-life mermaid army for unencumbered ocean exploring, as well as the woman of my dreams.