The Prime Minister is finding himself staring down the barrels of several metaphorical guns after his comments last week.

Speaking to the Saskatchewan Association for Rural Municipalities, Harper was asked if he felt guns were needed for safety in rural areas. He responded, “Gun ownership wasn’t just for the farm. It was to ensure a level of security when you’re a ways away from police assistance.” Many have accused the Prime Minister of promoting vigilante justice, something he assures urban Canadians and Quebecers is “patently untrue.” 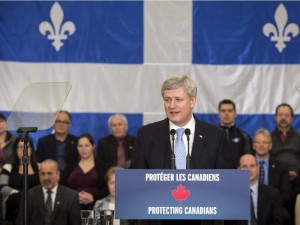 If this were true, it would render the Conservatives’ “tough on crime” stance moot. Why bother having laws, courts, and jails when you can have guns? Bob Hrycan, a Western criminal lawyer, said that, if Harper’s remarks encourage citizens to use guns for defence (outside of the law), the Tories aren’t actually doing enough to protect us. The rhetoric on gun laws has increased over the past few months after the introduction of the Common Sense Firearms Licensing Act last fall. The Conservatives want to cut the red tape surrounding firearms in Canada (for law abiding gun owners), while implementing harsher penalties for the criminal misuse of firearms. They’ve done nothing to alter the Criminal Code’s descriptions of “self defence” or, alternatively, of “good judgement,” leaving a number of supposedly law abiding gun owners/vigilantes behind bars.

Harper’s increasingly vocal stance on guns of late, may be intended to mollify his rural base in Ontario and in the West who, since the scraping of the gun registry in 2012, have been unimpressed with the government’s stagnancy on firearm-related issues. This registry’s presence had ensured the re-election of a number of Conservative MPs since its inception. Even the NFA accused the government of merely paying lip service to gun owners in an effort to win votes for the next election. 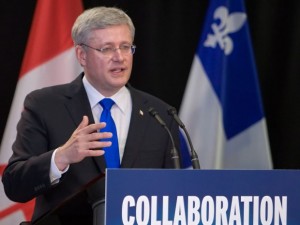 Bringing firearms back to the fore may actually hurt Conservative chances in Quebec come the fall. The province has suffered a number of firearm-related tragedies, including the most recent political assassination attempt in Canadian history. Quebec also ardently opposed the scrapping of the Gun Registry, going so far as to demand an injunction to maintain the Quebec portions. When hearing of the Prime Minister’s remarks, Premier Phillip Couillard, who represents a rural riding and owns guns, said, “A country where lots of guns are circulating is not a country the majority of Canadians and Quebecers want to live in.” Such a stance may ensure that the Tories do not stay popular in Quebec, especially in the coveted Montreal area where they desperately hope to gain a seat. They may have shot themselves in the foot on that one, literally.

Elsewhere in Canada, Conservative MPs in rural areas have been perfectly happy to spread fearful and unfounded tales of a Liberal government taking their constituents guns. Conservative MP for Wetaskwin, Alberta, Blaine Calkins said, “Trudeau can pry my guns from my cold dead hands””

It appears the Conservative party is doing what it can to make gun politics an issue in their election platform. With his numbers stagnant in the polls, the Prime Minister appears desperate to find something big with which to fight this election. Whether he’ll stick to guns (and gun owners) in the fall remains to be seen. Though it could ensure the re-election of rural MPs like Calkins, the urban ridings in Toronto, Montreal, and Vancouver may be less than pleased to court gun toting Tories.

Rest assured gun owners—Liberal or Conservative—your guns will be safe; very little will change from the laws which exist now. If you want real change, you can vote Libertarian.