In ringing in the Chinese New Year, Mandarin’s biggest promotional festival, the Liberal Party of Canada worked tirelessly in ushering Justin Trudeau’s hair, eyes, and whatever else is attached to those, around the GTA for some good ol’ pre-election pandering. The festivities began early Thursday, February 19th, which gave Trudeau almost no time for his beauty sleep. He first stopped at the Scarborough Yee-Hong Centre to meet with Chinese-Canadian seniors, even greeting them in their native language to reinforce just how great an effort Trudeau was making to not seem as white as he looks. I can only imagine them all muttering in Mandarin, “what an asshole,” as he walked away. Of course, everyone in the room was being graced with the opportunity to ogle Trudeau’s facial bone structure, so no one was really complaining.

“What Dr. Joseph Wong has been able to hold together with work from the community is an extraordinary achievement,” Trudeau said. “How we value, support and protect our elders and make sure that you are continuing to live fruitful, happy lives surrounded by family, friends and quality is at the centre of how we must define ourselves as a country.” Right at the centre? Really? Not even an iota to the left? I mean, of course our seniors today played an integral part in shaping our great nation, and we should offer them only the highest praise and quality of life, but we can’t forget who else we’d be defining Canada as: our crotchety, old, near-senile grandpa. Is that really who we want as the cornerstone of Canada? Yes, of course. His wildly inappropriate dinner-table jokes are hilarious. Maybe Trudeau is building up to the announcement of his new flag design.

I can sure salute this idea

Trudeau added, “It’s a wonderful occasion because I know in my family and in my celebration part of the Chinese New Year is to respect the elderly.” It must be so wonderful having a campaign team to write all your family values for you. I don’t know how much I buy it though; with his bad-boy demeanour, Trudeau always struck me as the type who would politely offer an old-lady assistance in crossing the street, walk with her to the middle of the road, then sprint away as fast as possible.

The seniors continued their celebration with lunch and entertainment after Trudeau left for his next stop: Markham’s Pacific Mall. Here, Trudeau was greeted by a tremendous applause, as he weaved through the throng of people (not without blessing the ether of Snapchat with a few selfies) to begin his presentation. 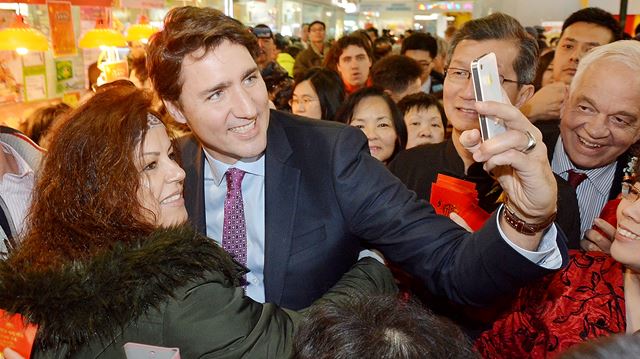 Now that he’s swept up in the hullabaloo of federal politics, it’s events like these that bring Justin back to his swingin’ glory days as a free spirited casanova, as apposed to the slightly politically constrained casanova he is now.
Mike Barrett

This, of course, swiftly dampened the enthusiasm of the crowed by reminding them that no Justin-Trudeau-celebrity-spotting goes without him having to make some “political statement” at the end. Uch. “This is going to be a year of hard work, a year of diligence, a year of creativity,” he said. “One hopes for prosperity and happiness and health anytime there is a new year but this year is also possibly going to be a year of change in the federal government.” Trudeau also took time to talk about Canada’s foreign relationship with China, “There is a tremendous amount of work to do to build on that relationship to share some of the great things we do in Canada with a China that is growing. At the same time as we can benefit from greater ties and greater market access to the extraordinarily growing successful economies of Asia of which China is at the top.” Before he left the stage, Trudeau was apparently offered to try on a traditional Chinese lion-dance costume and perform the dance, though he likely declined knowing the site would melt everyone in the audience’s face off.

It would be the most beautiful thing you’d ever see, but burn with the heat of a thousand suns. It would cause instant death, but you wouldn’t be able to look away.
Nerdist

But what seemed to be a Chinese New Year political tour going smoothly hit turbulence in the evening at The Liberal Party’s Year of the Sheep reception at the swanky Boulevard Club on Toronto’s lake shore. Amongst leading members of the Canadian-Chinese community, the guest of honour for the evening was the Chinese ambassador Luo Zhaohui. But he didn’t show up. In fact, I take this as both an insult to Justin, who was headlining the evening, as well as a personal insult to me. I mean, it’s like knowing the person who had the opportunity to see the ghosts of John and George reunite with Paul and Ringo for a private concert, but waved it down because he doesn’t like “grandpa music”. It’s just a slap in the face. I know you’re disappointed, buddy. But you’ll get back on the horse!
Blazing Cat Fur

It was announced that Mr. Lou had to prepare for “high-level meetings”, though it wouldn’t necessarily be diplomatic to appear at such a partisan event anyways. NDP’s ethics critic, Charlie Angus, commented, “To invite China’s diplomat to a meeting, to an event, that could be a reasonable thing. But what’s not reasonable is that it’s a partisan event attempting to raise awareness for the Liberal party. That crosses the line.”

On the bright side, being finally stood up by someone (after, like, a gazillion dates) will only strengthen our blue-eyed Adonis in the experience department, something some claim he is lacking in. All I can do is hope that next year Justin will join me in my Chinese New Year, which I celebrate every year with a candle-lit dinner by myself. I mean, isn’t it crazy that his invitation gets lost in the mail EVERY year?