The price of oil may be falling faster than Canadians’ faith in their government, but that doesn’t mean everything is cheaper than it used to be. Morals are always for sale, but some goods, like F-35 fighter jets are ever more expensive. Recently, Elections Canada suggested that the next election might be in the expensive crowd. In fact, Elections Canada’s figures suggest that our upcoming federal election might be approximately 30% more expensive than the 2011 election. Ay Caramba!

According to Elections Canada, voting will cost approximately $375 million. Why is this so expensive? Well, someone thought it was a good idea to add 30 new ridings to our already crowded map. We already have 10 provinces and 3 territories; one would think that to be enough. Yet, unless you live in the North or on P.E.I., there is a good chance your MP is working overtime to represent you and way too many of your fellow constituents. That’s right, your MP is supposed to represent you and your fellow constituents. Remember that on election day—it should help inform your vote. 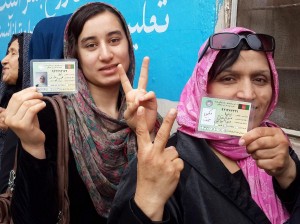 “V for Vouching” is no longer acceptable. Bring ID to the polls!
S. SABAWOON

Redrawn ridings are but one of many culprits driving up the cost of this election. Elections Canada says a rate of inflation of 6.9% and a 4.5% increase in the number of eligible voters will also increase costs. Furthermore, increases in postage costs represent approximately $6 million of the forecasted increase. Several blah blah blahs later, the average Canadian, formerly furious about increasing costs, is now more anxious to go to bed. ID is an interesting concept, isn’t it?

These are pretty boring explanations for why something as annoying as the 2015 election will cost tens of millions of dollars more than it used to. You have every right to confused, but you should resist the urge to be angry. Instead of throwing your computer and screaming about how “things ain’t like they used to be,” channel your potential rage into determined participation in your only chance to impact your government’s decisions. This event is happening whether you like it or not, so you might as well get your money’s worth.