When you mess with the Viking, you get the horns. Trinity Western University biology graduate Bethany Paquette received several nasty e-mails this week from modern day Norsemen.

Olaf Amundsen, who describes himself as a Viking with a PhD in Norse culture, is the hiring manager for Amaruk Wilderness Corp, a Norwegian outdoor tourism company that operates in northern Canada.  Bethany Paquette is taking Amundsen’s company to the Human Rights Tribunal of British Columbia on the grounds that her job application was rejected because of her own Christian beliefs and those of her alma mater. Trinity Western University is a Christian university known for their covenant, which prohibits students to engage in sexual intimacy outside heterosexual marriage, under pain of possible expulsion (and, presumably, STDs).

Amundsen’s emails to Paquette read, “Unlike Trinity Western University, we embrace diversity, and the right of people to sleep with or marry whoever they want. The Norse background of most of the guys at the management level means that we are not a Christian organization, and most of us actually see Christianity as having destroyed our culture, tradition and way of life.”

Amundsen himself. Who would have thought such beautiful blue eyes could be so intolerant? I would love to see the rest of his Tinder profile though…
Google Plus

The situation begs the age-old question: is it discriminatory to discriminate against a discriminator? Paquette think so. She claims her beliefs wouldn’t interfere with her work. In response to Amundsen, she said, “your disagreement with Trinity Western University, simply because they do not support sex outside of marriage, can in fact be noted as discrimination of approximately 76 per cent of the world population!!! Wow, that’s a lot of diverse people that you don’t embrace.” Paquette told the CBC she signed it “God Bless” in part because she knew it would irritate them. Amundsen replied, “‘God bless’ is very offensive to me and yet another sign of your attempts to impose your religious views on me. I do not want to be blessed by some guy… who has been the very reason for the most horrendous abuses and human rights violations in the history of the human race.” 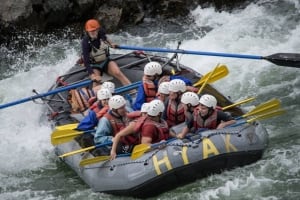 Paquette as a river guide, or does Amundsen not embrace the adrenaline high of taming a raging, white-water river too?
CBC

Firstly, why is Amundsen so sure God is “some guy”? God could very easily be “some gal.” Perhaps this is a sign of Amundsen discriminatory Viking ways. Secondly, who let all these Norwegians into our country? They’re taking jobs away from honest, hardworking, heterosexual Canadians like Paquette. We need to take proper measures. I say we ban them from marrying.

In hippy-communist Norway, it seems they’ve forgotten that freedom is a two way street. While Paquette has the right to her Christian values, so does Amundsen to practice his backwards Norse customs (I can only assume these entail eating whale while cheering on a canoe-pyre aflame with the country’s zanily-patterned curling pants). Human rights laws protect all Canadians from discrimination based on factors unrelated (PDF) to personal merit or job requirements.

Decked out like their Viking predecessors of yore.
Getty

Paquette’s lawyer says if the B.C. Human Rights Tribunal concludes his client was discriminated against, she will be seeking compensation for lost wages and “for injury to feelings and self respect.” “The main thing that she’s been asking for is to order this company to stop discriminating,” he stated.

As Norway thinks it’s so great with their high standard of living, I’m sure they can stand to lose this one thing. All I know is that I would hate to be on the tribunal that has to tell an intolerant person “you’re right.”