This article is part of our series Counter-Counter-Counter-Point. For a more culinary approach to the gastronomic delights of the tar sands, check out Michael Luba’s take.

I have to speak up against these pretentious egoists in British Columbia before their heads swell to Justin Trudeau-esque proportions. Let’s all sit down for a moment before things get out of hand. Take some deep breaths and reflect on how it feels to be a raging hypocrite.

On Tuesday, the Government of Canada gave conditional approval to Embridge’s Northern Gateway pipeline project, granted it meets the 209 conditions set by the National Energy Board and receives provincial approval from the Christy Clark Liberal Government. The news of Gateway’s approval was met with fire, brimstone, hell and high water from environmentalists, First Nations, uninformed citizens, high school students, and those angry 99 percenters still relishing in the remnants of the Occupy Movement.

Only days after the start of the BC teachers strike, opponents to the pipeline seem to have lost the ability to think critically. See what you’ve done Christy?! Take those kids out of school for one minute and all of a sudden they become morally superior resource experts ready to defend environmental interests at all costs… though of course it’s easy to oppose progress when one is unemployed. 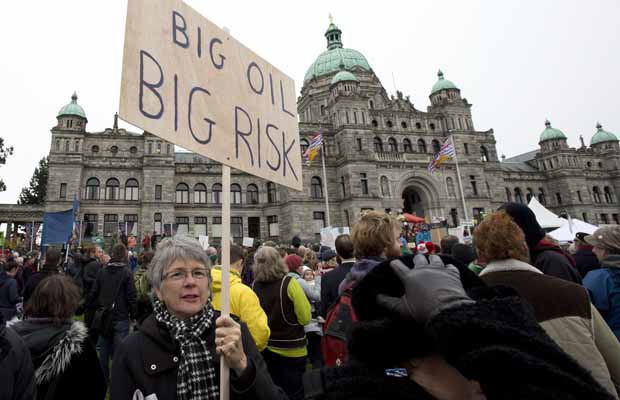 Get a job, ya hippy
Jonathan Hayward

Enough is enough. Let’s bring our kids back to school. It’s time for a math lesson.

If the entire province of British Columbia makes $100, and the provincial sales tax is 10%, how much tax revenue does the province take in?

What about $1.2 billion? That’s the amount of tax revenue Northern Gateway is supposed to bring to the province of BC over the next three decades.

All I’m asking is for a little consistency here. We can’t demand lower taxes, higher teacher salaries, and more social programs without creating economic opportunities for the province to grow. Unlike what the protestors think, the budget doesn’t just balance itself. A primary pillar of Canadian government is good governance: spending within our means. Otherwise we end up with the sort of Glen Clark NDP-style reckless spending of the 1990s that drove BC’s economy into the ground.

If the government is to stay out of deficit and still provide the social programs the people of British Columbia so desperately desire, they must create opportunities for jobs and economic growth. Ironically, those demanding higher salaries for teachers and more investment in social programs for the unemployed are the same ones protesting the Northern Gateway pipeline, the very project that would bring all of those things… and this is where the hypocrisy part comes in.

This is actually how it works.
Shutterstock/Alamy

The most dangerous aspect of rejecting the Northern Gateway pipeline is the precedent it sets. When the people of British Columbia realize that they have the power to grant a project the social license to operate, they will abuse it beyond belief.

The BC Assembly of First Nations has already stated that they will hold up potential Liquified Natural Gas (LNG) development projects if Northern Gateway is approved. LNG development is an essential component of growth for British Columbia. If executed correctly, BC could be the new Alberta. BC could too benefit from low, flat, taxes, a steady, unceasing demand for jobs, and the highest standard of living in the country. Regulatory systems like the National Energy Board have been put in place for a reason: to regulate. A refusal by concerned citizens to respect the decisions of independent, third party councils like the NEB can only spiral into a chaotic, anti-growth, anti-prosperity, and ultimately, anti-jobs mentality.

British Columbia’s future is being put in jeopardy by eco-extremists and disenfranchised, uninformed students who have learned from Quebec’s example: Threaten the growth, prosperity, and well-being of the nation, and reap the benefits.

Pipeline opponents are like little children reaching for a hot stove. The government must now act like a concerned parent and rush them away from the element before they get burned. Perhaps David Hume was right…the ignorant masses don’t know what’s best for them.