Welcome to Crazy Canadian Comments, a weekly column featuring the most outlandish comments made on popular news sites (mostly the National Post and Globe and Mail, because that’s where all the angry senior citizens are).

It’s that time of week, yet again. Canadian news sites are always generously packed with insane posts from disgruntled commenters. Let’s start off at the National Post. Here’s an article about Rob Ford claiming he is ready to return to his mayoral campaign on July 1, complete with a fancy photo of himself in a pool.

The Mayor’s engines are revved, and he’s ready to take Toronto back! When he isn’t smoking crack, on drunken rants, or running into cameras, he can be a very competent mayor! Apparently, the greatest part of his return will be his absence from the “gay parade.” What ever could that mean?

Over to The Globe and Mail, where our Ontario election vigilantes are laying down the unfiltered truth. 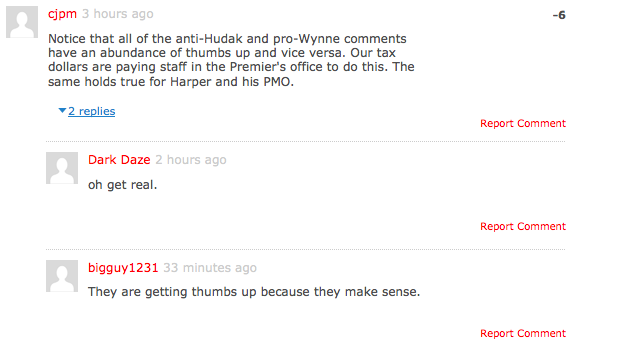 I should’ve known all along. Forget gas plants and e-health scandals…our tax dollars have been funding Globe and Mail commenters. Billions wasted on anti-PC posts. This is why Ontario is in the shite-hole.

Hey, look! A comment on an article about Desmond Tutu in Alberta — and it’s on our site!

Guilty as charged. We here at The True North Times specialize in propaganda.

I, uh….what? Why are you replying to yourself twice in a row? Is there a baby-manufacturing industry that is regulated by Wynne’s government? Do they offer wonderful pension plans?

Of course, we couldn’t finish our roundup without a nice pile of Quebec bashing.

QUEBEC? DID SOMEONE SAY QUEBEC? Here’s what we gotta do, alright. Are ye listening? Ready? Lets cut their transfer payments. Constitutional convention and legally binding agreements be damned. We’re doing them a favor. Wayne Allen, one top commenter, replies in approval to his fellow top commenter. Cute.