After four lonely days 0f no new news on Rob Ford (two of those days were admittedly weekends, that has never stopped the Fords before), we get an update. Doug Ford, standing before the sacred aisles of the Toronto City Council announced that, like Jesus, Rob Ford would return to us, and rise from the ashes to save our souls from the baby Baskin, the menacing Mernagh, the depraved Bitch, and the horrors of Chow.

Two weeks ago, Rob Ford had vanished, and for just a few moments we had no idea where he was. We searched from Chicago to Cabbagetown, Brampton to Bracebridge, Markham to Muskoka, but he could not be found. Then, in a flash of happiness, he appeared near GreeneStone, taking selfies with every passerby and “banking” with his wife. We thought that “banking” meant “having rough sex,” but then came the potential sex scandal, when a woman crashed Rob Ford’s SUV, claiming that she had left her watch in his bedroom.

All eyes turned to Doug Ford: did Robbie know about the scandal? How is he doing? When will he come back? There’s been no shortage of Rob Ford news, but still we worry that in his absence we will go into withdrawal and wilt as a flower cut off from the soil; atrophy as a muscle deprived of its use. In this darkest hour, Doug Ford ascended to the podium, and boldly announced that Rob Ford would return in “the next four or five weeks [although] I’m not really sure.” 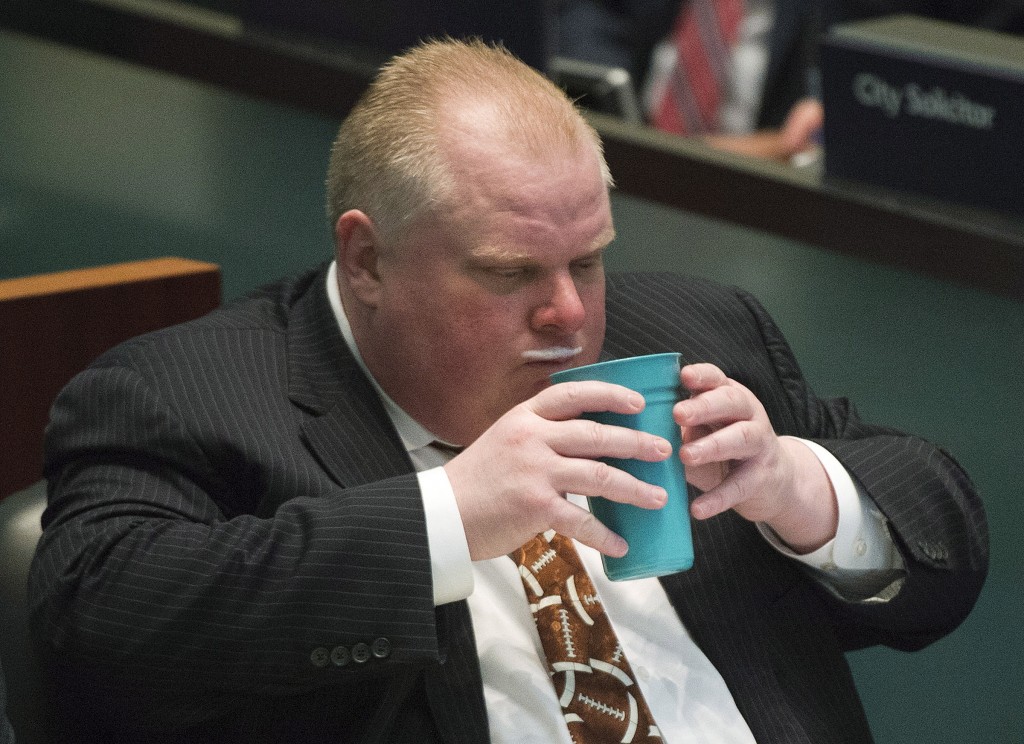 Rob Ford absorbs our sins as milk pictured above, taking poison into his body so that we may be spared.
Postmedia News

That’s it then. The fourth horseman has broken the seventh seal, and our saviour returns to deliver us to salvation. I could continue with more mixed metaphors, but I must return to the alter and pile on the sacraments. Rob Ford  *might* be back as early as July, and that leaves four fun-filled months until his imminent re-coronation when Toronto elects a mayor in October. I can’t wait.