Remember those awful afternoons where your mother had to disconnect the internet and order you to get some fresh air instead of spending the whole day on your computer?  Remember grudgingly packing your bags for a weekend camping trip with mom, dad, and that insufferable sibling, where you actually had to—god forbid—communicate with them for a whole 48 hours?  Remember when you had to choose between canoe camping or crushing candies?  A stroll in the park or a scroll down your newsfeed?  Loving nature or liking selfies?  Technophiles of Canada, I’m here to tell you that your days of grumbling and grudging compromise are over.  Why?  Because Wi-Fi is coming to a once-serene park near you!

That’s right, kids, it’s your lucky day.  Parks Canada, a federal agency in charge of 44 national parks and 160 historic sites, has stated that they intent to install wireless internet hotspots in up to 50 of their parks over the coming year.  And if 50 connected natural reserves aren’t enough for you, they expect that this number will triple over the next three years.  It’s about time!  Really, how can you enjoy your vacation if you’re not planning the entire thing out on Pinterest as it happens?

Parks Canada says that cellular coverage is currently weak or entirely absent in many of their venues.  Obviously, tax dollars must be spent on this critical issue.  While some chalets attached to the parks do have wireless Internet, Parks Canada feels that it takes too long to get back to an internet zone when you reach the end of your hiking trail. After all, what satisfaction is there in conquering a mountain if you can’t Snapchat about it in real time?  Provincial Parks in Ontario and Manitoba have already begun to offer access to Wi-Fi and have successfully rendered escaping the hustle and bustle of routine life impossible.  Oh, I think your grandmother is calling to invite you to dinner on Sunday.  You should answer it.

Parks Canada expects to offer the Wi-Fi services free of charge.  However, in cases where the location is remote or where the cost of maintenance is ambiguously defined as excessive, texters, tweeters, and tumblrs will be charges a fee.  I don’t know about you, but I think an excessive maintenance cost may be indicative that national parks shouldn’t have Wi-Fi. 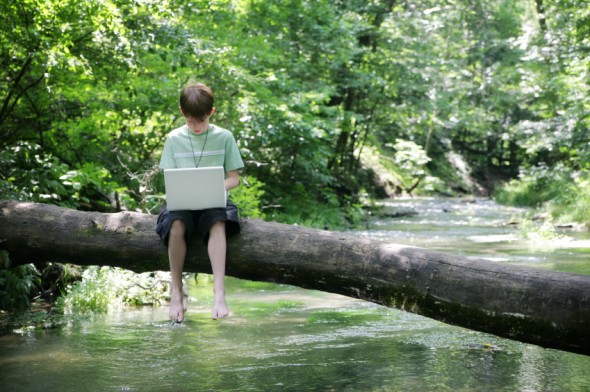 Well, at least this way he’s getting some fresh air. Oh, and don’t tell him that you didn’t bring the charger. He still thinks he has hours left to play WoW.
David Farbman

At the moment, Parks Canada is requesting offers from contractors to push this project through.  We all know that there’s an enormous market for internet in remote locations where exhausted Canadians retreat to in order to escape the constant connectivity of—oh wait…

In a tradition of putting words into people’s mouths, Parks Canada says “visitors want to be able to stay in touch with work, friends and family, stay up to date on the news and connect with social media.” Francois Duclos, a spokesman from Parks Canada said, “Canada is a very big country, and it has become very urban. And for young people from cities, things are different.”  He got one point right, things certainly are becoming different.  Thanks to Parks Canada, your camping trips will no longer feel any different from being at home.  Now, you can text and tweet from the bushes instead of your cushy bathrooms.  Who knows, maybe the foliage will inspire you to put those 140 characters to new and unique uses.

What Parks Canada really should do is make an Instagram account with pictures of their beautiful parks.  At this point, what’s the difference?  At least Instagram has filters.