The beginning of April is a wonderful time. The fierce winter begins to recede into the depths of an icy hell, Universities enter their final days of classes, and perhaps most importantly, the NHL and NBA post-seasons begin.

It is an especially exciting time for Canadian basketball fans this year, as the Toronto Raptors have clinched a playoff berth for the first time since 2008. The 2008 Toronto Raptors included now two-time NBA champion Chris Bosh (of the Miami Heat), another less famous Ford from Toronto (T.J. Ford), and Kim Kardashian’s easily forgettable ex, Kris Humphries.  They finished with a mediocre 41-41 record, good enough to finish second in the division. Fast forward six long, gruesome years, to find that the Raptors have clawed their way back into the NBA playoffs and are looking to make a name for themselves as a viable championship contender. Years of bad basketball are finally starting to become worth it for Torontonians, as a number of first round picks who finally came into their own led their team this year. The emergence of young guns Terrence Ross, Kyle Lowry, DeMar DeRozan, and 6″11 Jonas Valanciunas have brought the Raptors back to the playoffs, and set a round one matchup with the veteran squad from Brooklyn, the Nets. As a team and city hungry for a deep playoff run, many analysts believe the Toronto Raptors can do some damage in this post-season, and could be a force for years to come. As Canada’s only NBA team, the Raptors represent our country’s basketball hopes, and I think I speak for a number of Canadians when I say that we are all hoping for a successful April and May for the Dinos. 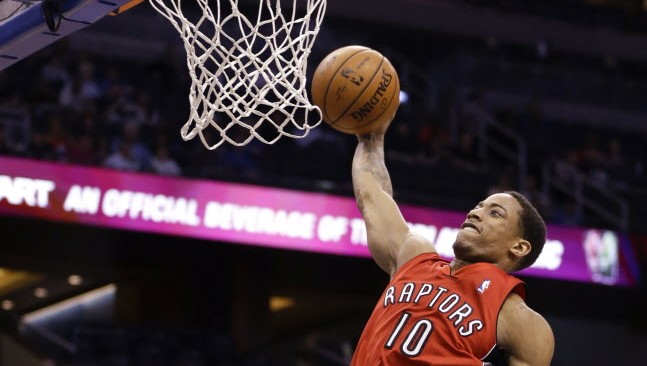 Hockey may not officially be Canada’s national sport, but I would be airing on the safe side in saying that Hockey is still very much, our game. We are constantly the best bet in Olympic hockey events, both men’s and women’s, we boast over 2,500 indoor rinks and 5,000 outdoor rinks, and we have over 600,000 hockey players.  5,000 Canadians have taken part in at least one NHL game, which is 4,000 more than any other country in the world. Even though any team that brings home Stanley’s hardware this June will surely have one or many Canadians on the active roster, this year has been considered one of the worst in Canadian teams’ history. Amongst the seven NHL teams from Canada—Montreal, Ottawa, Toronto, Winnipeg, Calgary, Edmonton, and Vancouver— only one team, the Montreal Canadiens, has clinched a berth in the playoffs. The truth is, not all the Canadian teams had high hopes for this year, so here is a realistic breakdown of each team’s ambitions from the season’s opening in October.

After clinching the playoffs last year and giving eventual Eastern Conference champion Boston Bruins a near heart attack in round one, the Leafs entered this season with a chip on their shoulder. Led by coach Randy Carlyle with a top line of Phil Kessel, James Van Riemsdyk, and Tyler Bozak, the Leafs posited a dominant scoring threat.  In the end, terrible neutral zone play, absolutely dismal puck possession numbers, and lacklustre goaltending from injury fill-in James Reimer resulted in a Leafs demise that saw them lose eight crucial games in a row during the last month of the season.  Such a slip took them from out of the playoff hunt and put them into the draft lottery.

The Calgary Flames entered the season without their leader of the past decade, Jarome Iginla, who left in the middle of the 2012-2013 campaign in search of a final chance at hoisting the Stanley Cup. Iginla’s departure is telling of the state of Calgary’s hockey team.  After reaching the Stanley Cup finals 10 years ago, it has been downhill at the Calgary Saddledome. Admittedly in the depths of a long rebuilding process that will have a complete overhaul of the team’s management and players, the Flames actually posted half decent numbers this year with a roster that truly lacks the talent that an NHL playoff team must have. The Flames played with pride all year and deserve to be proud of their accomplishments over the season.  Pretty soon, with young stars like Boston College’s Johnny “Johnny Hockey” Gaudreau and phenom Sean Monahan on the rise, the Flames will begin to heat up.  It won’t be too long before the “C” of red is restored to its former glory.

The Winnipeg Jets fell victim to an incredibly strong division this year. 5/7 of the teams above them in the NHL’s Central division made the playoffs this year, and in convincing fashion. The Jets suffered the firing of their coach, Claude Noel, at midseason and his replacement was none less than former Maple Leafs coach, Paul Maurice. Maurice steered the ship in the right direction and posted a strong first few weeks with the Jets, but a number of injuries to key players, and a lack of depth led to yet another disappointing season for Winnipeg. Caught in a limbo between a rebuild and a potential playoff bubble team, the Jets are in a difficult position.  They could very well face a few more years of mediocrity before their problems are totally fixed.

Team owner Daryl Katz’ letter to the fans after an embarrassing loss in their home arena pretty much sums up the Edmonton Oilers season. After missing the playoffs for an eighth season in a row, the once proud dynasty from Edmonton has sunk to the basement of the NHL. Years and years of first round picks in the top 10 seem to have been commonplace for the Oilers over the past decade, but fans are growing impatient with the lack of team production, and it has taken a toll on the city as a whole. One rare bright spot for the Oilers this season was the bittersweet retirement of ex-Captain Canada Ryan Smyth, whose love for hockey, the Oilers, and the city of Edmonton is simply contagious. Nothing but respect to the guy, who played almost 20 seasons in the league, and wore his heart on his sleeve for every single shift. His final game ended in a ten minute long standing ovation from the Oilers faithful, and will give goosebumps to any sports fan. So, after yet another year of Oil Country disappointment, kudos to the Oilers fans and franchise for saying goodbye to #94 with class.

The Ottawa Senators went into training camp with a newfound pride after making it to the second round of last year’s playoffs by handily beating the Montreal Canadiens. With the notable summer signing of Bobby Ryan by long-time Senators GM Bryan Murray, the Senators appeared to have a bolstered lineup set to make a deep run into the postseason. Fast forward to the end of March, and the sans-leadership core Senators fell about three wins short of a playoff spot. With weak goaltending from last year’s star Craig Anderson, the Senators could not power through, and endured a season of highs and lows. However, the emergence of second liners Kyle Turris and Clarke Macarthur highlights that the Senators are only a few small changes away from being a strong hockey team. Look for them to bounce back next season.

For the past several years, the Vancouver Canucks have been a very strong hockey team in a stacked Western Conference.  The two Swedish twins, Daniel and Henrik Sedin, and powerful two-way forward Ryan Kesler lead the team. This offseason, the ‘Nucks and Rangers performed the rare action of “trading” coaches, as former bench boss Alain Vigneault packed his bags and headed for the Big Apple (where he led the Rangers to the playoffs this season), and controversial but animated coach John “Torts” Tortorella began his tenure as coach of Vancouver. Hampered by injuries to star players and crippled by lack of communication between the team’s front office and its management bigwigs, the Vancouver Canucks fell down more than a few wrings this year, where they posted a disappointing 83 points, their worst results in 15 years. Changes are coming this offseason in Vancouver, for the players, but mostly for the management.

Like last year, the Montreal Canadiens, led by goaltender Carey Price, qualified for the playoffs in a strong position. Solidifying his pedigree as one of the league’s best after back-to-back shutouts for national powerhouse Team Canada in the Sochi Olympics, Carey has successfully carried the Canadiens’ and Canadians’  torch this season. As rivalries between Canada’s NHL teams are quite solid, few will admit that the Habs, for now, are Canada’s team. But the truth is that, for the first time since 1973, the Habs will be the only Canadian team fighting for the Stanley Cup, a prize which hasn’t been back to Canada in 21 years (A Montreal Canadiens victory).

The General Manager’s addition of Austrian sniper Thomas Vanek at the trade deadline has transformed a talented but incomplete puzzle into a team capable of making a run for the cup—something that truly has not been a realistic prospect for many years here in Montreal. With a solidified offensive threat, a consistent back end, and arguably one of the best goaltenders in the league, the Canadiens are a picture of a complete team. Up first is a matchup with the Tampa Bay Lightning, a threatening offensive team captained by one of the best players in the world, Steven Stamkos. It will be interesting to see how the Canadiens, the NHL’s leading team in shots blocked, will try and defend the skilled Canadian sniper.

Interesting side note, the last time the Montreal Canadiens were the only Canadian team in the Stanley Cup Playoffs (1973), they beat the Chicago Blackhawks in a best of 7 series 4-2 and brought home Stanley. It was Henri Richard’s 11th championship. Take a look at this map for a graphic, provided by Facebook, regarding the geography of hockey fandom for the 2014 playoffs.

So far, raps are down 1-0 in the series, and the Canadiens are up 3-0. Only time will tell what the future holds for Canada’s Montreal Canadiens (that just sounds so right…), but En Montreal, for the first time in a long time, “Ca Sens de la Coupe”.